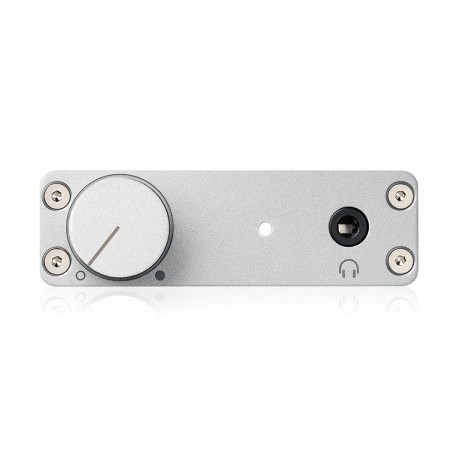 DSD files generate a wider range of sound than CDs so you hear more of the detail. The uDAC5 is designed to play the most complex and demanding DSD256 format. This elevates the quality of any computer sourced audio files, adding weight and speed to the bass, clarity and substance to midrange tones and openness and extension to the highs.

The circuitry of the uDAC5 offers twice the power and nearly twice the current reserves of its predecessor. Music lovers can now connect their in-ear and some over-ear headphones while playing their favourite conventional or high resolution music.

The uDAC5 offers unrivalled flexibility. It generates superior sound whether it is being used as a high resolution desktop audio controller, USB DSD DAC or a headphone amp. Additional analogue and digital outputs enables instant high resolution connection to amplifiers and active speakers.

At home and on the move

Small enough to fit in your pocket, the uDAC5 is the ideal audio companion for use on the move or at home. The ultra-portable DAC offers ease of use and connection for professionals and music lovers on-the-go.

The uDAC5 is able to process DSD content, which captures the full range of frequencies from the original studio recording. DSD relies on a different means to clock decode and convert signal from raw data in to audible sound. The illustration below demonstrates the vast difference in both file size and frequency range when compared to various other formats.

High resolution files are vast. The files are required in order to retain the much greater range of frequencies and information that was retained from the original recordings.

The basics behind the DSD formats involve a rapid rate of sampling of data processing small samples at a high speed. The rate of sampling is 64 times greater than that of a CD sampling rate. It creates a “sound curve” that is far more accurate and is nearer to the way in which an audible note is created. In addition it is able to cover a far wider range of frequencies than that of MP3 files or CD quality disc/files.

The final result is a far more immersive and life like performance delivered through speakers or in/on ear headphones.

The term high resolution is generally applied to all audio formats with higher resolutions than that of a CD (44.1/16) and WAV/AIFF audio files.

Other formats that use high resolution audio:

DSD recordings are not compatible with PCM audio format. DSD files require a dedicated media player which is able to interact with the host computer and play them.